“Our nation and economy can no longer afford to wait to restore and rebuild our nation’s infrastructure." - Norma Jean Mattei, 2017 ASCE President

America's infrastructure was a major topic of discussion prior to the recent election and has been brought to the forefront once again after the March 9th release of ASCE's 2017 Infrastructure Report Card. Similarly, it was the main issue discussed in Washington, D.C. during the ASCE Legislative Fly-In earlier this month. Let us vow to keep the discussion going, as our nation, economy and future depend on it!

How often does the average person wonder whether or not the bridge that they are about to drive across is structurally deficient, fear that the building that they are in may collapse, or question the quality of the water coming out of their faucet? Not very much usually, although that is all beginning to change due to the recent increase of news coverage on infrastructure issues across the country. America's infrastructure scored a D+ and it is really starting to show! As engineers, however, we know that the first step towards solving any problem is to start by identifying it. ASCE's 2017 Infrastructure Report Card does just that and the video below offers a few solutions as well.

Investment, bold leadership, and planning are the three things that need to be done in order to fix our infrastructure challenges, according to Greg DiLoreto, Chair of the ASCE Committee on America's Infrastructure. Over 200 ASCE members, representing 49 states and Puerto Rico, traveled to Washington, D.C. earlier this month to meet with their elected officials. They not only discussed the Report Card grades, but also the various solutions that are still an option. Check out #ASCE2DC on Facebook, Twitter, and Instagram for photos from the Fly-In. Below are a few of my favorites.

While at the Fly-In, I had the privaledge of meeting with Congressman Mark Takano, Congresswoman Grace Napolitano, and Jeff Vanderslice, Congressman Dana Rohrabacher's staffer. See below for a couple of photos.

"Each of us has an obligation to make sure that we are investing in our nation's infrastructure." -  Tom Smith, ASCE Executive Director

Although investment, bold leadership and planning are the three things that need to be done to fix our infrastructure, we have already seen a push in the opposite direction. The new administration's proposed "skinny" budget, for example, includes many cuts to items that have proven to be successful in the past, including key infrastructure programs! Immediate and continuous action on behalf of ASCE members is imperative! Act now! 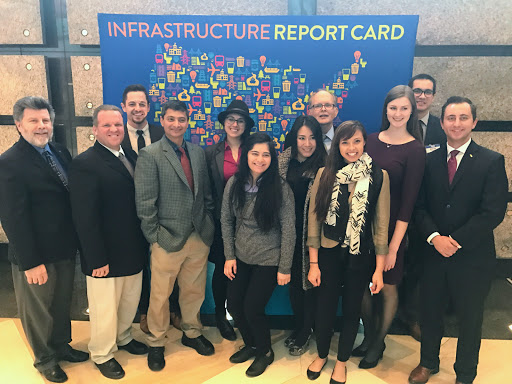